I love clear nights when the moon is full. We live on a gorgeous little spot in the middle of a bunch of farmland. There's nothing commercial behind our house--just a large farm, then nothing but nature--the beautiful, rolling hills of Central California. Nothing will ever be built there--permanent grazing land--and I love knowing that. The view we have is amazing--although my camera & photography skills are not--I'm working on that! But here is what I saw when I stepped outside last night...lured by the Man in the Moon......... 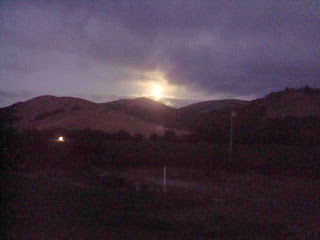 While I was taking the picture, I heard a little rustle, looked out and saw a tiny baby opossum staring at me--shiny, unblinking eyes--he just froze in place when he realized I was there. Didn't play dead--maybe he hasn't learned that yet! I didn't hang around long...mama opossoms are not very nice!

The full moon was perfect last night as I had just finished a card for the Crafty Secrets' challenge over on Paper Craft Planet, hosted by the lovely Darlene. I guess I just had moon on the brain last night......! 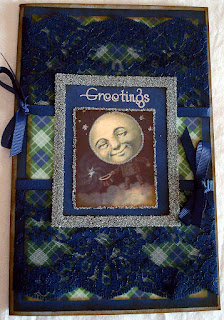 Good morning! Had this idea the other day & just finished last night, so I wanted to show you today. If you've already ordered some of the Crafty Secrets Vintage Postcard Kits--and you really should!--you've noticed on the cover sheet the tiny little images on the bottom that show the regular-sized images contained in the kit. Well, they're just clear & perfect and I didn't have the heart to throw them away when I finished the kit, so I thought of doing this.

It was such an easy project--just took time for the different drying times in- between steps. I used the Postcard Kit, of course!, scraps from the Crafty Secrets Earthy & Radiant paper packs for backing each charm (Halloween-looking prints), Tim Holtz charm fragments--so cool!--Inkssentials Glossy Accents to glue the charm fragments to the images, Tombow to glue the backing paper to the backside of the image, another charm fragment to back the charm, and Inkssentials silver Memory Foil tape to wrap around the charm when it was finished. Gives it the look of a soldered charm--just without burning the flesh off your hands!

The tape just happened to be the perfect width for the two charm fragments with the 2 papers in between--lucky me! 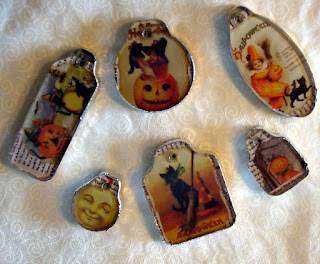 Last week I said I'd share a little about my Mother with you. I had so much fun taking pictures of her magical house this last week--every corner is just filled with whimsy--she's such a child at heart, and has such a way of decorating--I definitely didn't get that gene, unfortunately!

She has always loved toys--dolls, especially, and when very young, her parents weren't as well off as later in life, and would tell her they couldn't afford to get her the toy she wanted. She liked the good stuff--usually a beautiful Steiff creation or something like that--(which she still adores). So, she just started making her own toys. Her style is very much like that of Steiff--she has a great appreciation for German, old-world style toys and things, as you can see in her home. She has always made things that are jointed--they HAVE to be jointed! She loves it when her creations can stand on their own (just like her children, she always says!)

The name of her business is "KAOS"--which is her name, Karen Ann Ostlund Smith, but also what she feels perfectly describes her! (I would call it a magical, creative chaos!)

I could go on and on about Mom, but I think I'll just start by showing her to you, along with some of her creations. She does most of her creating with wool felt, as well as wool roving when she does her needle-felting dolls. She's most known for her adorable hedgehogs, which I adore! She's sold & given so many away--here's just a few to show you: 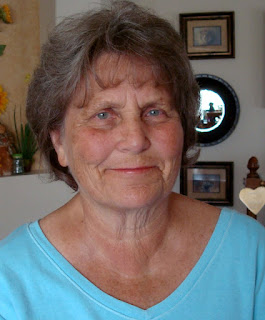 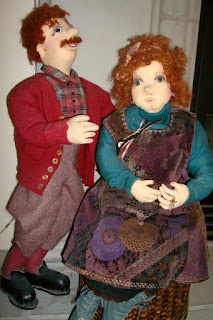 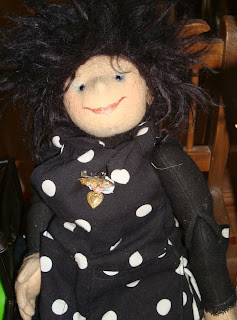 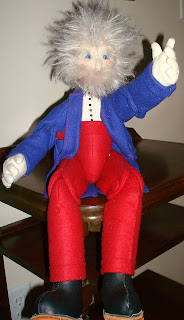 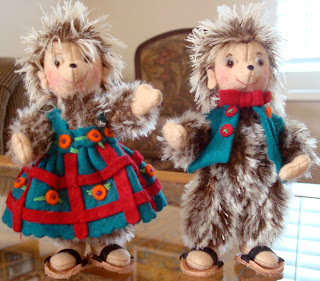 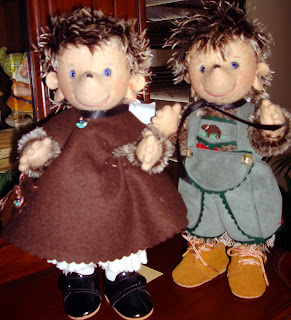 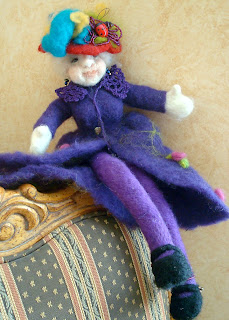 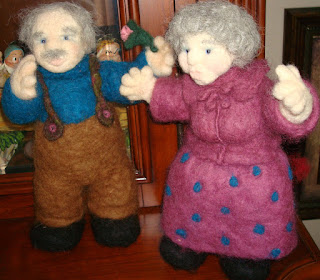 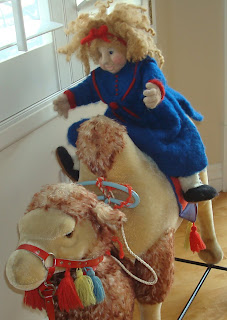 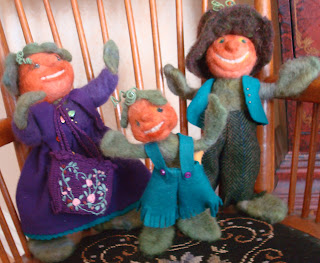 There's so much more I could show--this is just a bit--but enough for now! I think tomorrow I'll show you a bit of her house, which, as I said, is just filled with fun! But enough for today! Thanks for stopping by!
Posted by Hearts Turned at 9:33 AM 2 comments:

This week's Crafty Secrets' challenge over at Splitcoast is to use plaid in our projects--easy peasy! We Campbells love plaid! I wasn't able to stamp for a week, so of course I went nuts and made two plaid cards--no moderation for me! These were both made with Crafty Secrets images, plaid papers from other companies, and lots of fun ribbon, lace, etc. I got that wonderful golden plaid ribbon from my Mom's stash when I was visiting last week--funny to build a card around the ribbon, but that's pretty much what I did! 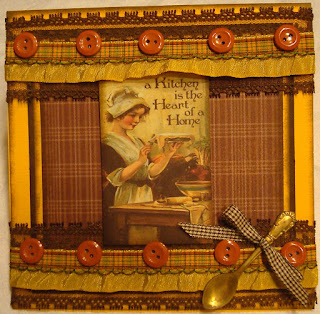 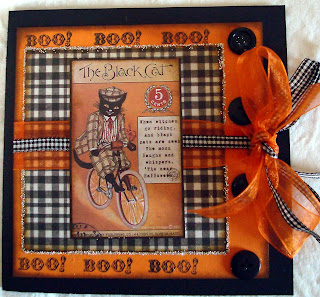 This was in the paper a few years ago--my husband, Roger, competed in the Scottish Highland Games for 4 or 5 years--until life got WAY too crazy. He often won, too, which was fun! In this photo he's about to throw a caber--which is basically a telephone pole, if you don't already know...The reason I posted this here, by the way, is of course, he's wearing his kilt! That's all the plaid for today.... 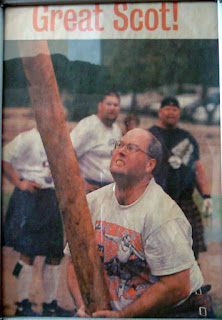 Thanks for checking in--more later today!
Posted by Hearts Turned at 7:34 AM 1 comment: