All the trick or treaters have long gone home, my family's watching "The Sixth Sense"--I've seen it a couple of times, and it's one of those that I can't watch too often, know what I mean? The girls have never seen it before, though, so.....

I was hoping to watch one of my favorite Halloween movies tonight--"Arsenic and Old Lace"...it's just wonderful! Cary Grant--isn't he just the best?! Maybe tomorrow...!

Here's my girls tonight--not the best photos ever, but since I added pictures of them when they were young, I couldn't very well leave them out now! 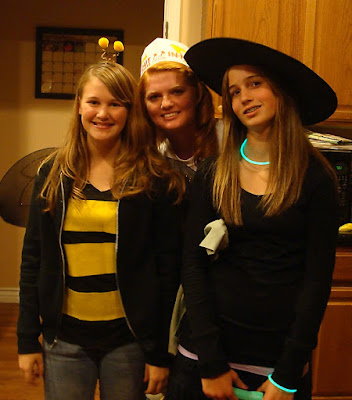 Annie had a friend over--Emma the bee on the left, and here's Sarah in the middle, and Annie, my cute little witch. Her other pictures didn't turn out very well, so just a group shot for her tonight! 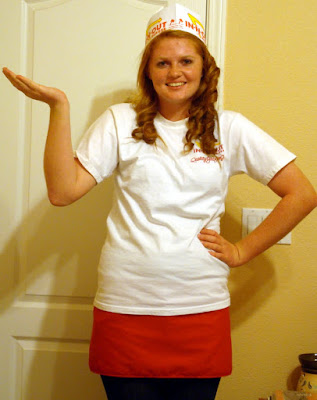 Sarah, my 14-year-old, was an "In-N-Out" employee--do you know the restaurant? It's a pretty famous burger joint--originally just in California, but now spread out through the western states. Fabulous burgers! She made her own apron, so I was pretty proud of her for that!

They gave her their hat last time she was there, she bought a t-shirt, made the apron, and she's good to go!

One last thing....thought you might like the recipe for some pumpkin pancakes that I made for my family (and 5 other girls that spent the night!) this morning. They were absolutely DELICIOUS!!! I didn't manage to get a picture of them because, well, I was MAKING them, and they were devoured pretty quickly. That's what it's all about! Found the recipe online. It was originally printed in Bon Appetit magazine in 2000.

Whisk the first 5 ingredients in a large bowl to blend. Stir milk, pumpkin, egg yolks, melted butter, and vanilla together in a separate bowl. Add the pumpkin mixture to the dry mixture, stir until smooth--batter will be thick. Using electric mixer, beat the egg whites in a separate bowl until stiff, but not dry. Fold egg whites into batter. Then cook up those fabulous flapjacks!

In reading some of the reviews on the recipe, some said the pancakes were fabulous, others said that they weren't spicy enough--so I added more! I also thought that brown sugar had a bit more depth and flavor and would work really well...and it sure did!
Serve with real maple syrup, of course! You will LOVE these! I will be making them again ridiculously soon!

And now it's 12:01 am--which means HAPPY NOVEMBER! Can you believe it? Time to start planning that amazing homemade Thanksgiving meal I know you're all dreaming of--can't wait!

I'll be back tomorrow with a card or two, but for tonight, sweet dreams! 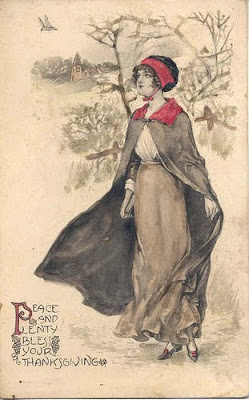