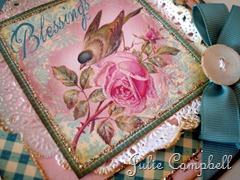 “Hope is the thing with feathers

That perches in the soul…”

Such a beautiful day today!  Definitely felt more like summer here on the central coast than fall….

This month, as we all know, we concentrate on Breast Cancer Awareness…all things pink and hopeful.  Celebrating brave women who fought it and survived…and remembering those who fought a very hard fight, and are no longer with us…there are a few in my family in both categories…

(I just realized while re-reading this that today, October 14th, is my Grandmother Smith’s birthday…the beautiful LaPriel I’ve told you about before…)

…she died far too young from this terrible disease. 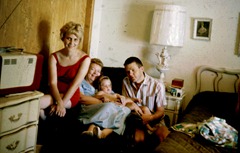 This is our little family…my Mom--Karen, Dad--Clayn (LaPriel’s son), and me…we just came in from a swim in Grandma’s backyard.  This was taken in 1964…not to long before she passed away.

Over at Splitcoast, they are also focusing on this important cause…and in the Crafty Secrets’ forum this week, the challenge is to make a card that expresses encouragement…

…here’s what I came up with: 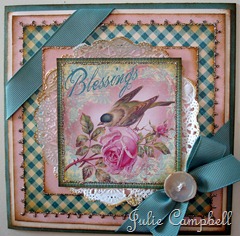 I love this sweet birdie, and as I worked on the card, I just heard over and over in my head the beginning lines from Emily Dickenson’s famous poem, “Hope”…

“Hope is the thing with feathers,

That perches in the soul,

And sings the tune—without the words,

And never stops at all.” 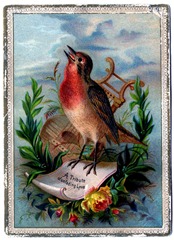 …which brought very strongly into my mind my mother, who has fought her own fight with cancer, and has won.

In 1992, my sweet mother was diagnosed with fairly advanced breast cancer, and was quickly scheduled for surgery.

She didn’t know if her body would be the same as she had always known it when she awoke after surgery…and it was not. 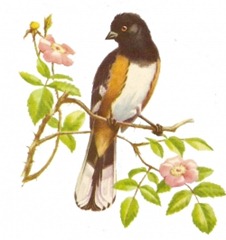 She remembers very vividly laying in her hospital bed in a darkened room after the surgery…the anesthesia had worn off and the reality had set in….as well as the fear.

She was all alone in the room.  She wondered if she would ever be the same again.  What did the future hold?  Could she make it  through what lay ahead of her?  She was very afraid…

As she lay there, we were on our way down the hall to visit her, and were trying to explain to our three-year-old daughter, Chelsea, why her grandma was in the hospital… 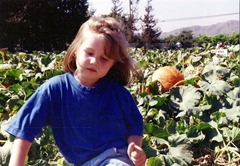 (Chelsea, just a couple of months after Mom’s mastectomy…and, very appropriately, in a pumpkin patch at Halloween time!)

…as we rounded the corner into her room, she said, in a loud, little child voice, “What’s wrong with my Grandma?!” 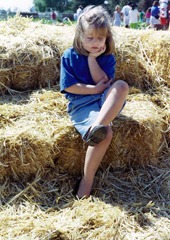 As soon as my Mother heard that, she heard a voice in her head say that her reaction at that very moment would make all the difference, and she turned over in the bed and said very strongly, and with a smile on her face…

“There’s NOTHING wrong with your Grandma!”

She said that was her turning point…the moment hope re-entered her life. 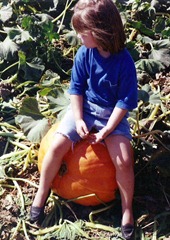 Were there more scary moments?  Of course there were!  Still are…but hope and faith remain strong… 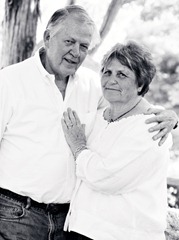 …now, 17 years later, my Mother is strong and healthy, though she still hates those twice-yearly exams!

But she goes to them just the same, and still has a clean bill of health, which makes my father very happy… 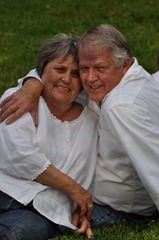 …and it makes all these people very happy, too… 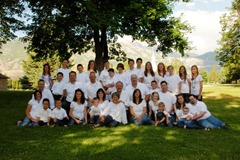 “Hope is the thing with feathers”… 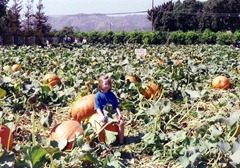 “Hope is the thing with feathers,

That perches in the soul,

And sings the tune—without the words,

And never stops at all.

And sweetest in the gale is heard;

And sore must be the storm

That could abash the little bird

That kept so many warm.

I’ve heard it in the chillest land,

And on the strangest sea;

Yet, never, in extremity,

It asked a crumb of me.” 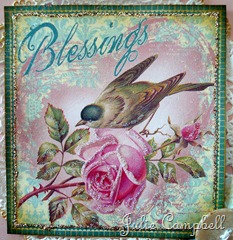 I hope you have a most wonderful night…