The Claddagh, a Card, Sugary Green Cookies...and "The Quiet Man" 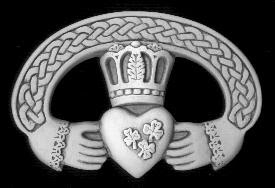 Hope it's been a lovely weekend!  We've had a great one, and just about to sit down to a movie with the family...I love Sunday nights!

Just one card to share with you tonight...I love this new set from Flourishes! 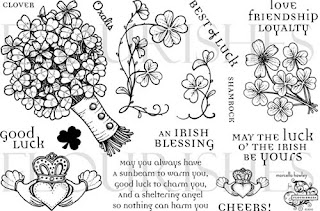 I've been in love with the Claddagh symbol for as long as I can remember, and when I saw this set announced, I just HAD to have it!  Here's the card I made today: 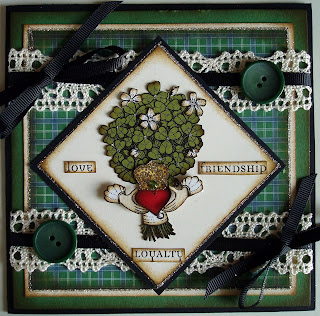 I love the beautiful bouquet of shamrocks, and decided to put the Claddagh symbol on top of it.  Love, Friendship and Loyalty--that's what the Claddagh stands for...pretty good things to represent, I think! 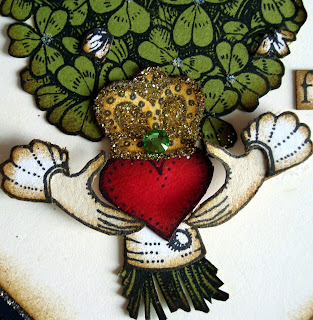 ...lots of glitter, of course, and a green crystal rhinestone on the crown...I love this image!  I did all paper-piecing here.  Call me crazy, but I really enjoy cutting out the little pieces and putting them together--I love the dimension and deep colors it gives an image.

Here's a little history of the Claddagh...there are many legends on how it originated...who knows the actual truth?  I would imagine it's a bit of all of them combined.  All legends have their basis in fact, they say!  Here's the story I like the best, and it's possibly the most plausible...

"The most common - and most believable - tale of Claddagh history begins with a young man from Galway by the name of Richard Joyce leaving his true love to make his fortune in the West Indies. As he sailed toward his goal, his ship was captured by a band of pirates and he was sold as a slave to a Moorish goldsmith. 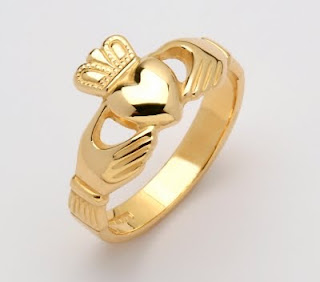 Through the many years of service to the goldsmith, Richard perfected the art of jewelry making himself, eventually becoming a master craftsman and earning the respect and admiration of his master. When King William III negotiated the freedom of the slaves in 1689, the Moor offered Richard the hand of his daughter and a healthy dowry on top of that. But Richard refused....for his heart still lay in Ireland.

Returning to Galway, Richard found that his sweetheart had remained true to him through all those years. In a fitting tribute to his true love, he fashioned the Claddagh ring. The two hands represented their friendship. The crown signified their loyalty. The heart symbolized their love. Richard wedded his beloved and presented the first Claddagh to her as her wedding ring. And the two lived happily ever after....never to be apart again.

Custom also dictates how the ring should be worn...here's a great image I found that explains it...

I also love this custom, taken from the same site as above...

"Throughout Claddagh history, the ring has been handed down from mother to daughter with the saying, 'With these hands I give you my heart and I crown it with my love.' There is no traditional age when the ring is supposed to be handed down. Each mother determines when her own daughter is ready for this special family heirloom." 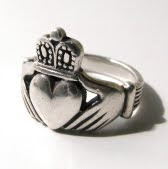 I've been wanting to get reaquainted with a favorite old movie...and tonight was the night! 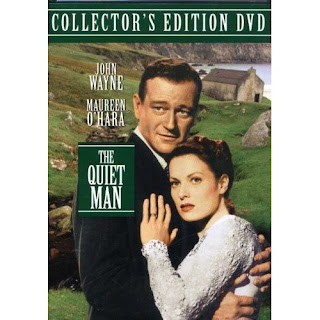 What a wonderful film!  Full of old Irish folk songs, beautiful scenery, and John Wayne and Maureen O'Hara--doesn't get much better than that!  This was my daughters' first time to watch it, and they absolutely loved it! 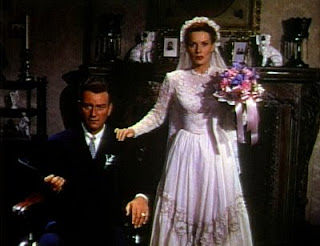 Re-visiting this charming film was the perfect ending to a lovely weekend!

And now for something sweet!  I took one of our favorite sugar cookie recipes (thank-you, Mrs. Fields!) and gave it a little St. Patty's Day twist... 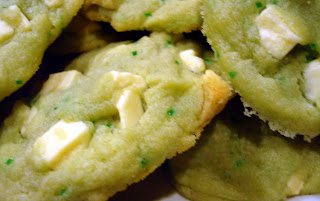 I intended for them to just be a subtle green, but my daughter Annie would have none of that!  Drop after drop of green was added to the dough....and this is what we got!

Cream the butter and sugar.  Add the rest of the ingredients, adding flour last.  Do not overmix.  If cutting them out with cookie cutters, refrigerate for 1 hour.  I just did mine as drop cookies, so didn't refrigerate at all. 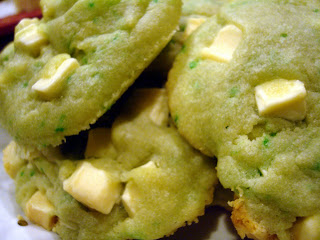 Hope you have a wonderful evening, and I'll see you very soon with something new... 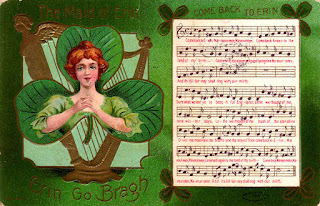 Posted by Hearts Turned at 8:40 PM